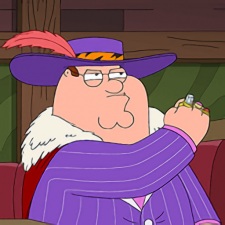 KonoSuba: God's Blessing on This Wonderful World! - A Review 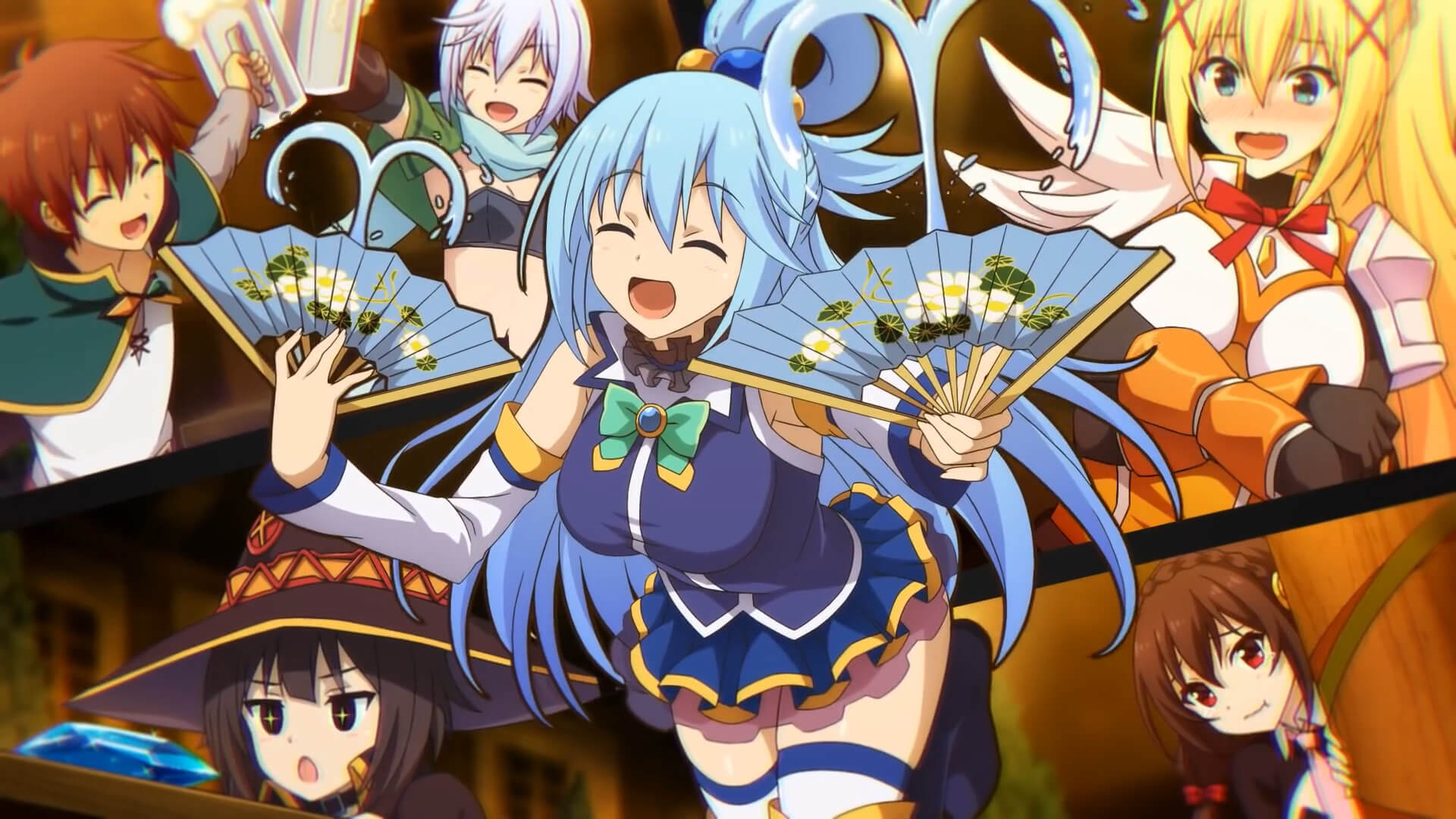 KonoSuba has long been recommended to me, and I am glad that I watched it. It’s a light-hearted anime (as you can probably tell from the cover photo), and it’s really easy to watch, which is great when you don’t want to get invested in a huge and detailed anime.

KonoSuba has two seasons, and an upcoming movie. I’ll be taking a look at the two seasons of anime in this review.

At its core, KonoSuba is about a group of useless people trying to function in a fantasy world. Like Shield Hero, the world has MMO like reference: 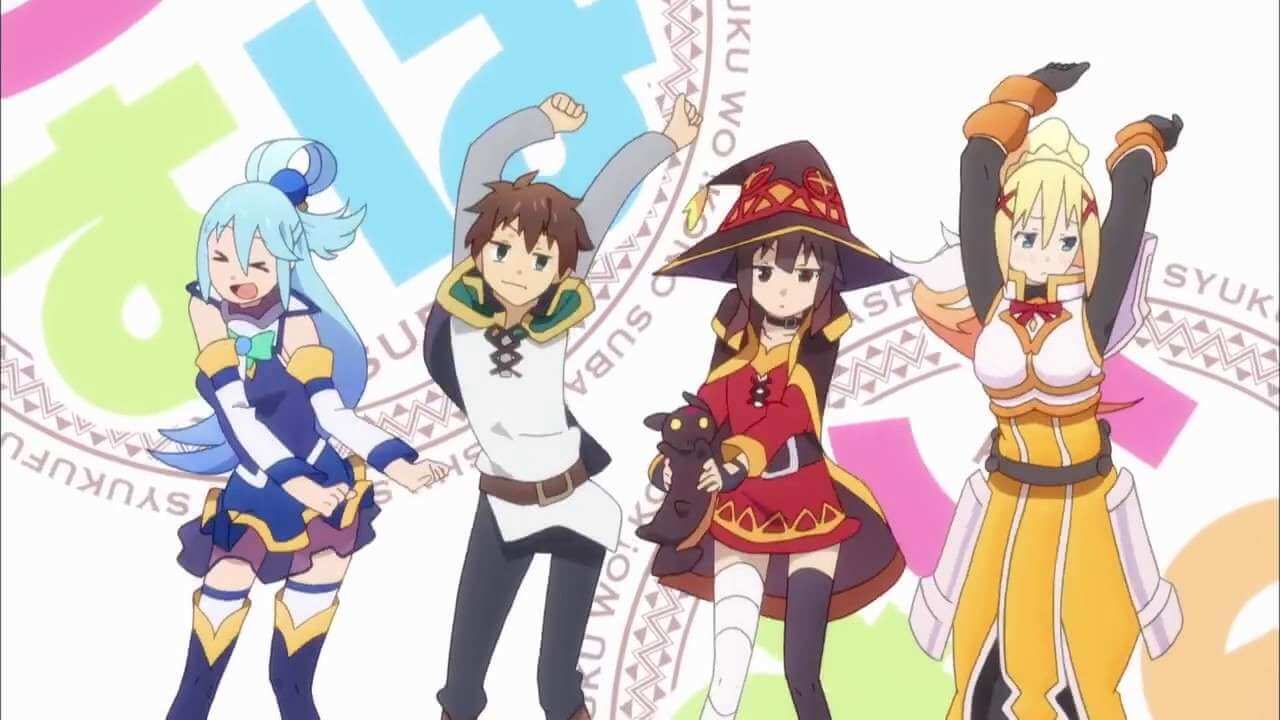 This leads into the comedy aspect of the anime - much of it is based around the uselessness of the characters in the anime, as well as their inability to fight. They often end up getting saved by other characters, and just winning by a fluke.

Whilst there isn’t really a solid story - it’s like in an MMO, with the characters going around and completing quests and other MMO like activities together. Each quest is fully completed, and each episode could be considered an arc. Unlike That Time I Got Reincarnated as a Slime, each arc/episode actually finishes with a decent conclusion, and you can see the bond growing between the various members of the useless team.

Comedy is usually sketchy in animes - it can often be hit or miss - and KonoSuba is no exception. Whilst there were many funny parts, and the anime knows it’s a parody, there were a few jokes that just fell completely flat, and even cringy. Whether this is due to translation, or off writing, I don’t know. However, the anime knew that it was meant to be a comedy, and the characters knew too. I enjoyed the comedy in the anime - it gave me a few chuckles, and I would say the comedy was decent.

I’ve already outlined the characters above, but I’ll outline them in further detail here:

As mentioned above, the show does a good job at character development, and you grow to know the characters. Right off the bat, when the various characters are introduced to the party, you learn their unique characteristics. The anime doesn’t weave around this like some do, and just tells you who they are straight out, meaning that you have a solid foundation to the character, and know what to expect of them.

I found that this worked really well, and the anime did a good job of slipping in a few more subtle traits to characters along the way. KonoSuba does a good job of character development, leading you to know the characters after the first few episodes, and grow attached to them.

The cast of KonoSuba is outrageous, and they are the main focus of the show. As KonoSuba is focused around the characters, their development has to be good, and the watcher must like them, in order to succeed. Luckily, KonoSuba manages this well. The characters work well with each other, and each have their funny traits and quirks.

The art and animation in KonoSuba is good, especially with Megumins explosion scenes. What’s interesting is that sometimes the characters are drawn really badly, which actually works really well - it plays well into the comedy aspect of the anime. 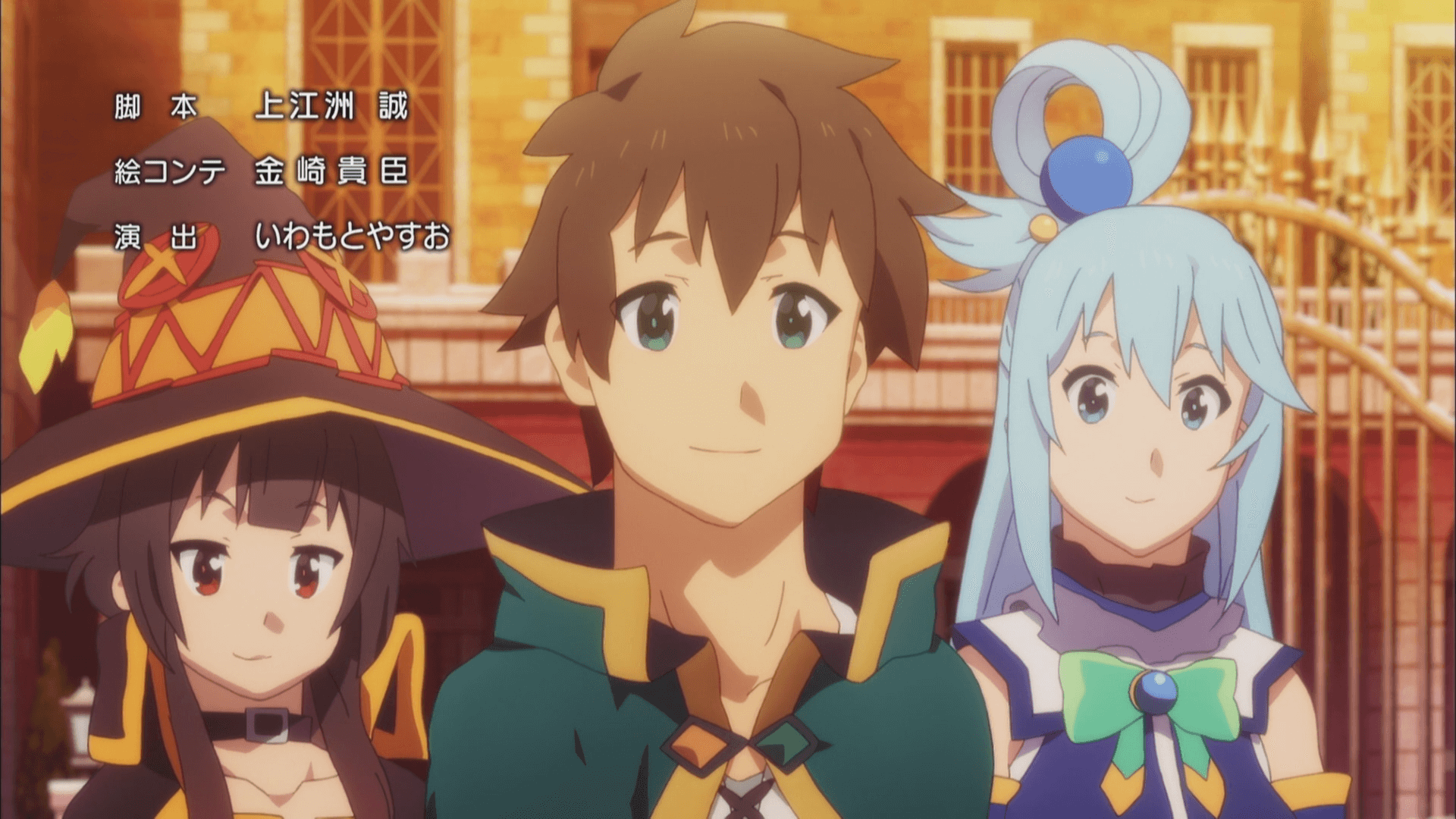 Whilst being a GIF ruins some of the quality, you can still see that it’s really well animated. In addition to this, some of the drawing is great, like the below image: 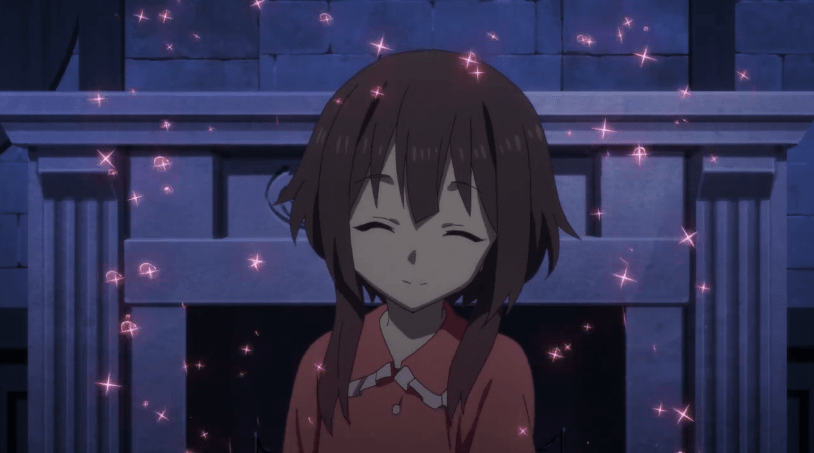 This happens throughout the anime. It’s really confusing, as sometimes the animation of the characters is really good, and sometimes, it’s terrible. As I’ve said, sometimes they are made bad on purpose - but this isn’t true for all the scenes. It’s almost as if they concentrated on the quality of some scenes and ran out of times for the others.

Whilst the rapidly changing quality of the characters depictions can throw you off, I certainly wouldn’t say the animation is bad. The larger scenes are done brilliantly, with large boss fights animated really well, and Megumins explosion magic is portrayed very well. It conveys how impressive it is to the viewer, and is made funny when Megumin falls down as she’s out of energy.

The intro song and outro songs are both catchy and enjoyable. The characters are really well voiced in the subbed version (I have heard good things about the dub). Sound is well done in KonoSuba.

KonoSuba is a fun show to watch. It’s light, and you can view it without concentrating too much. It doesn’t try too hard to be something it isn’t, and knows that it’s a light-hearted comedy. If you want something with a deep storyline, KonoSuba doesn’t have that. However, the characters are interesting and fun, and it’s a fun watch.

tl;dr: A fun watch with engaging characters but little storyline - KonoSuba is a light-hearted comedy that doesn’t try to be something that it’s not.